Skip to content
Back
Blog Use Cases
12 min read

How To Tell Meaningful Real-time Stories During the Presidential Debates

While the U.S. Presidential Debates for the 2020 Presidential Election produced animated and heated discussions from all sides of the stage, the insightful coverage of the debate produced by news outlets around the nation is what stood out.

News organizations across the nation monitored and analyzed the conversation surrounding the debate and told well-rounded, engaging stories using Tagboard’s full suite of visualization features. With these recent debates in mind as we draw closer to U.S. Election Day, we’ve put together some key tactics that lead to impactful storytelling.

It’s important to set the stage and prepare your audience for the topics and trends leading up to a debate or marquee election event. Analyzing conversations on social media is a great way to achieve this, and CBS Chicago produced an exceptional example of how to execute this ahead of the first U.S. Presidential Debate.

In the segment below, CBS Chicago reporter, Chris Tye, gives viewers a 360o preview of the debate showing where the conversation around each candidate was taking place using a Heatmap, what topics were trending using a Leaderboard, and why the debate matters using a Twitter Poll.

Easily accomplished using Tagboard Producer, the combination of these different vantage points in one segment allowed Tye to tell a complete story that captured the pulse of the social conversation.

Asking for input from your viewers and followers is also an effective strategy to guide the topics of your show and involve the audience directly. Ahead of the final presidential debate, Cheddar provided a great blueprint for this by posing a question on their Twitter and displaying the responses live on air.

Full livestream can be found here

Strategies During the Debate

During a live debate, viewers typically look for two main factors alongside the debate itself: what is everyone saying online, and are the candidates’ statements true?

While not every media outlet has the same resources, there are simple ways to provide this important content that teams of any size can implement. The Tagboard platform enables you to accomplish this by curating relevant real-time content from social media and using cloud-based graphics to create and edit fact-check graphics on the fly.

NowThis News proved that you don’t need an anchor or a studio to produce an engaging and informative broadcast. They livestreamed the debate and used real-time Twitter content to add live commentary instead. Selecting the top trending tweets from verified users, NowThis News provided a medium for viewers to watch the debate and consume social content all in one place.

During the Vice Presidential debate, NowThis News didn’t ignore the fly in the room and played off of one of the top trending topics near the end of the debate by also including a few lighthearted comments from Twitter. 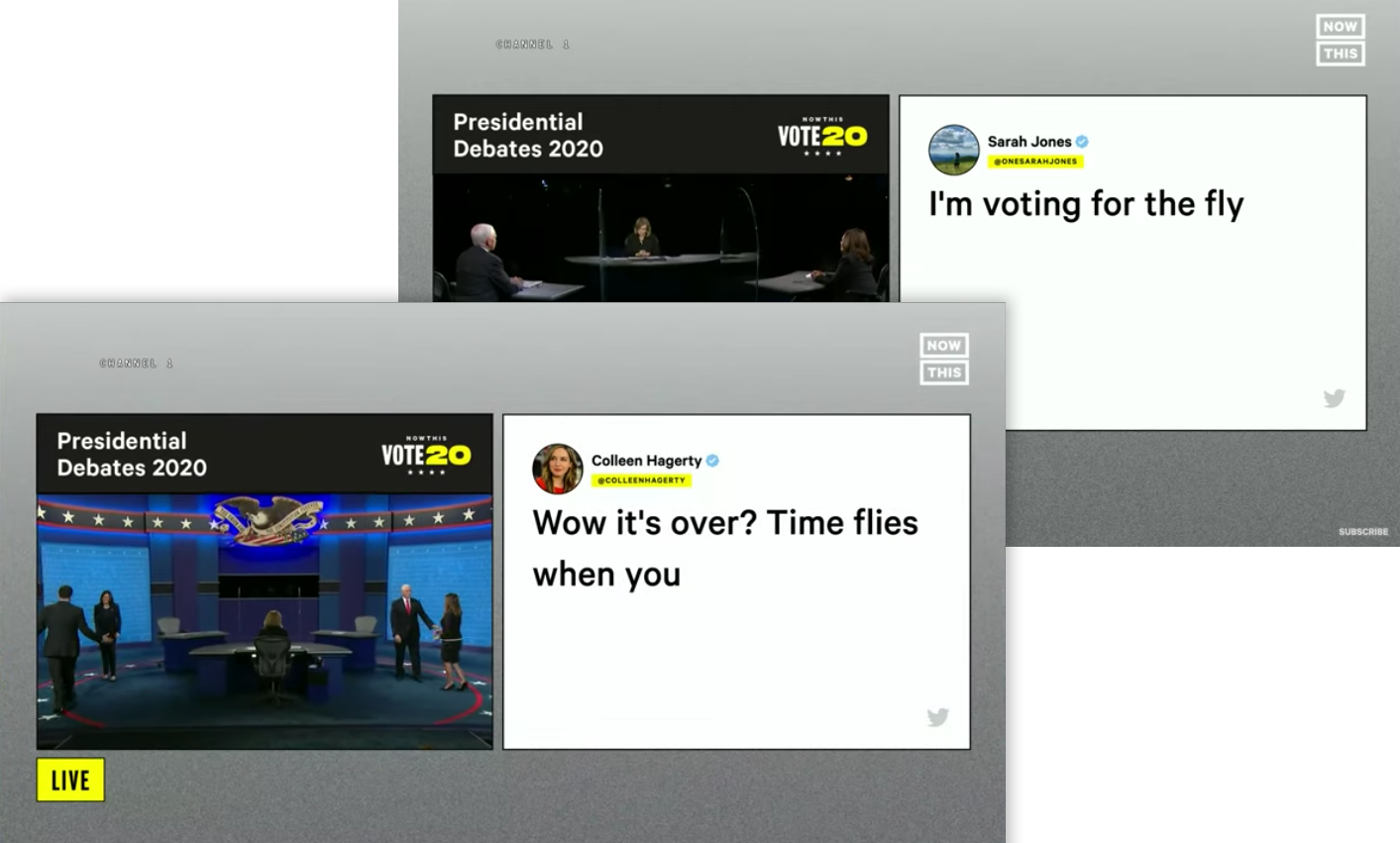 The full livestream can be found here

In a similar production setup, Crooked Media utilized social media in combination with informational graphics to fact-check statements made by each candidate throughout the night. The flexibility of Tagboard Producer’s cloud-based graphics system allowed the Crooked Media team to build and edit graphics on the fly as researchers cross-checked statements in real-time.

The full livestream can be found here

Crooked Media proved that integrating social media and custom graphics into a broadcast or livestream can have a dramatic impact. Their broadcast added Crooked Media’s unique context to the debate and kept viewers attention throughout its entirety.

As the dust settles after a debate, analysis of statements made by each candidate and how certain topics resonated with the audience begins across the nation. It’s helpful for news outlets to be prepared with content collected throughout the debate and look to data visualizations for before & after comparisons.

To incorporate the voice of their local audience, CBS Chicago posted a series of Twitter Polls for their followers to vote on and used the results for instant feedback on how the debate moderator performed as well as which candidate came out ahead in the eyes of their followers.

By harnessing the diverse perspectives found on social media, analyzing trends in the national and local conversations, and keeping viewers informed with graphics updated in real-time, news outlets everywhere can tell more effective and complete stories this election season.

Looking for more ideas on how to best cover the elections? Check out Tagboard’s Election Coverage Guide for Media Teams of All Sizes or reach out to success@tagboard.com.

Tagboard Appoints Aaron Ryan, President of NorthRock X and Former NBA Executive, to Its Board of Directors

How Tagboard became part of the language inside UFC

Read More
Request a Demo
Our Spring Sale Has Started